It’s been quite some time since I last reviewed the Sitcomics title called “Super ‘Suckers.”  Super ‘Suckers #2 is broken down into three parts, (numbered as 2.1, 2.2, and 2.3), but I’m reviewing this second story arc as one in order to review this second story line in its entirety.  The second story is called “Mirror, Mirror,” the story is by Darin Henry, scripted by Darin Henry and Robin Taylor, illustrated by Jeff Shultz, colored by Glenn Whitmore, and lettered by Marshall Dillon.  What makes Sitcomics so unique is their rating system.  Instead of “All-Ages,” “Teen+,” or “Mature,” they go by a TV schedule.  “7:00-8:00” refers to ages “9+,” and “9:00” refers to “Teens and Up.” This series is rated “9:00” for a good reason, because…college life!

Like my previous review for “Super ‘Suckers #1,” [click HERE to view], I’ll start off by introducing some of the new characters that appear in this story arc.  Below are images and character information for the cast of “Super ‘Suckers #2.” 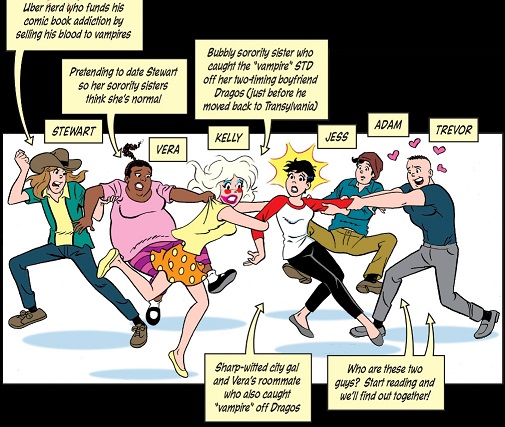 Trevor:  Trevor is another unknown character from the introduction page, and I will say this about Trevor…he’s Stewart’s roommate.  However, after an incident, Trevor’s life will change! 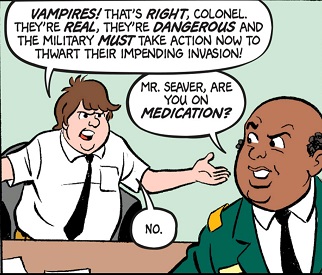 Mr. Seaver:  He has military contact with Colonel Amos Berryhill.  Mr. Seaver swears that vampires are real, since his fiancée left him for an Italian vampire named Luigi.  From that moment, Mr. Seaver will do what it takes to prove that the existence of vampires is indeed, a fact, not a myth.

Colonel Amos Berryhill:  It’s not known (yet) how he knows Mr. Seaver, but in all honesty, one would wonder why he puts up with him.  A big revelation will unfold with the Colonel by story’s end.

Rosetta, Dakota, and Asia:  These ladies are more of Kelly‘s sorority sisters at Rho, Rho, Rho.  Given their facial expressions, why do they all appear to be so shocked? 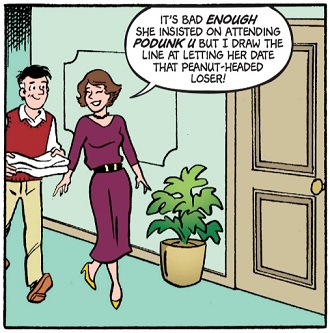 Sy and Bonnie:  Sy and Bonnie are the loving parents of Jess.  Upon meeting Stewart, they don’t like him, and they fear that their daughter, Jess, might have feelings for him.  However, these two might have something planned in order to avoid their daughter falling for a geek like Stewart…

Looking at the three covers for Issue 2, the first thought that will cross people’s minds is that these characters look like they came out of an “Archie” comic book.  Artist Jeff Shultz illustrated issues of “Archie” and “Betty and Veronica,” so that’s where the art style comes from.  Darin Henry is the writer, and his credits include writing for “Seinfeld,” “Futurama,” “Grosse Pointe,” and “The War At Home.”  What makes Sitcomics so unique are the regular “Sit-Commercials” that interrupt the story at various points, making these stories feel like a television series with the commercials added on.

“Super ‘Suckers #2” starts off at The Pentagon, three weeks prior to the current timeline of the main story.  Here readers will meet Mr. Seaver and Colonel Berryhill.  Mr. Seaver goes on and on about the current threat to America’s National Security…vampires!  Naturally, the Colonel doesn’t take Mr. Seaver seriously, so he kicks Mr. Seaver out of his office…LITERALLY!  This ends the prologue to this story arc. 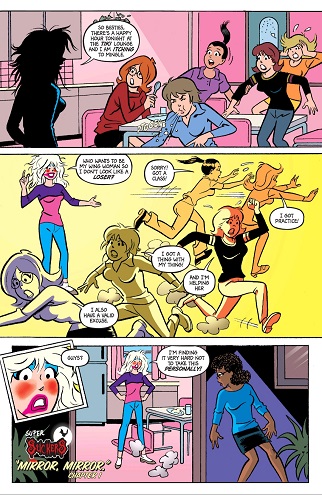 Present day, back at Dixon College in Pennsylvania, at the Rho Rho Rho Sorority House, Kelly makes her way downstairs.  Upon seeing her sorority sisters, Kelly can’t figure out why everyone’s running away from her.  After all, it’s not like Kelly can look at herself in the mirror to brush her hair and apply her makeup.  This is the beginning of the second story arc of “Super ‘Suckers: Mirror, Mirror.” 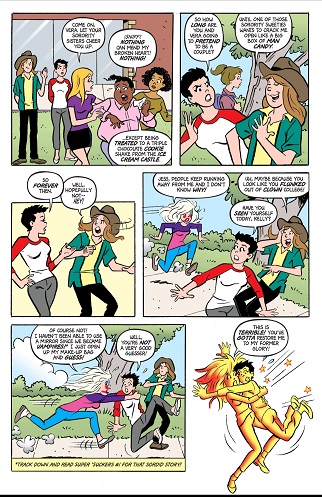 Across campus, readers will see Vera Lodge hugging on her [pretend] boyfriend, Stewart.  Stewart is heading to Philadelphia with Vera‘s roommate, Jess, so Vera and Stewart are saying their goodbye’s to each other.  Stewart is going to attend a comic book convention and wants to get a comic book signed, Jess is going to visit her parents due to the funeral of her Aunt Sadie.  Jess is allowing Stewart to stay at her parents house for two reasons, he has a place to stay while the comic book convention is going on, and the other reason is so she can feed off of his blood.  The problem on campus is that Kelly‘s makeup looks like a certain clown, a “clown prince of crime,” from another comic book series.  Without Jess‘ help, how will Kelly be able to fix her hair and makeup? 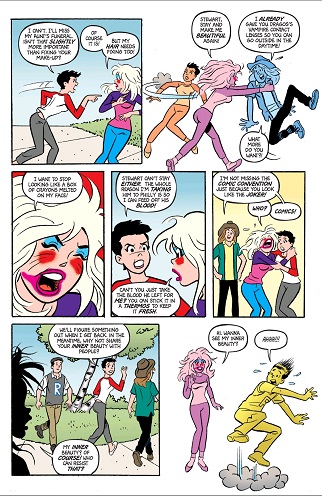 Moments later, readers will meet Trevor, Stewart‘s roommate, and they’ll get to see what kind of character he is.  Shortly after, Kelly finds someone who could possibly help her with her appearances, but how will this character fare?  Once Stewart and Jess arrive at her parents’ house, readers will see what they think of Stewart, and they’ll see the craziness that goes on after they catch their daughter, Jess, “feeding” off of Stewart.  Issue one ends with Vera receiving a letter and Kelly making a grand discovery while online shopping… 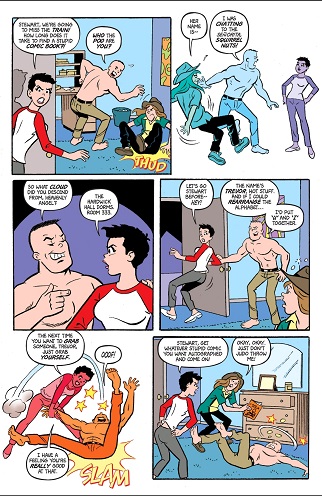 Issue two sets up the various plots going on throughout this story line.  This and readers will be introduced to Adam Shankman.  Back at the sorority house, Kelly needs to calm down , so she decides to go to the freezer to get some of Stewart‘s frozen blood popsicles…but what will happen when her sorority sister, Lyric, wakes up and catches her in the kitchen? Also, who storms into Vera‘s dorm room?  The third and final issue of this second story arc concludes all the plots within this story, and it’s satisfying!  The action, the humor, the characterization…it’s all here just as it was in the previous two installments of issue one. 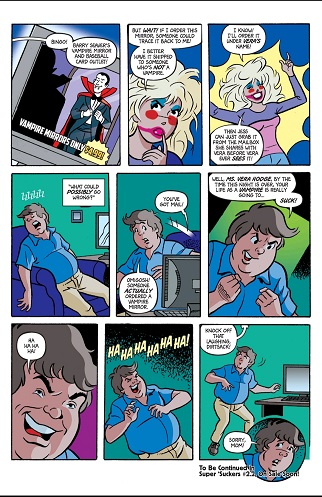 Overall, the three issues of “Super ‘Suckers #2” are well written, the artwork is amazing, the coloring makes each scene pop, and the characters come to life even more, so at this point, these characters will grow on the readers who read this series from the beginning.  From the weird nature of Mr. Seaver, to Kelly‘s inability to keep up with her appearances due to no reflection in the mirror, Vera‘s tough but carefree mannerisms, Stewart‘s “geeky” ways of being, and Jess‘ quirkiness, these are the characters that make this series so much fun to read.  With current events going on worldwide, this social distancing and quarantine, people are looking for ways to pass the time due to boredom.  Read a book, physical or digital.  Try something new.  Give “Super ‘Suckers” a chance, it’s worth the read!  Having said this, I rate the three issues of “Super ‘Suckers #2: Mirror, Mirror” 4.7 out of 5 Geek-Heads!  Big kudos to the creative team of “Super ‘Suckers,” I am so looking forward to reviewing the next chapters!  You can purchase the digital comics on comiXology by clicking on the issue numbers below:

One thought on “Super ‘Suckers #2 (Sitcomics)”