Skip to content
Date: March 31, 2019Author: Jose J. Becerra Jr.
5. scratcher
An inexperienced, untalented, unclean and untrained tattooer. Though usually found working out of home kitchens, they have been known to find work in disreputable tattoo shops. The word “Scratcher” comes from the look of the, so called “tattoos”, they produce. Looking more like colored scratchs, than recognizable images. 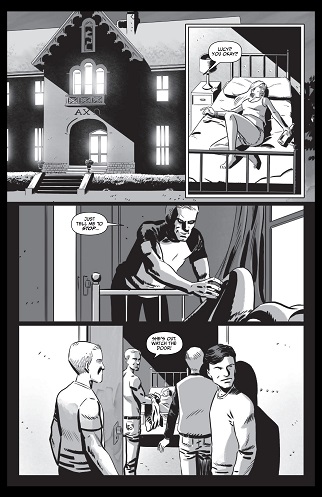 The tagline for this issue goes as follows: “When Dee runs into trouble in Austin, TX, an unlikely ally comes to her aid. Together they must stop the infected from multiplying.”  Judging by the cover to this issue, readers will have a glimpse of this…multiplying.  I always like discussing the covers for this series, because they tell a story on their own.  Seeing the twenty-seven (or so) heads popping out of the water, red eyes and all…WOW!  If this doesn’t send chills down your spine, I don’t know what will!  Artist Juan Romera nailed it again with this cover!

The introduction to this story begins with an awful act, but who’s the victim here?  In this story, readers are introduced to the third person who is infected with a tattoo from the protagonist of this series, Dee.  As readers have witnessed from the previous two issues, the ink possesses the host who was tattooed by Dee (you can read these reviews HERE).  The opening sequence to this story are so gory, so bloody disgusting, by page five, readers will be saying, “Oh. My. (__________)[Fill in the blanks to what verbage you use.]  This comic book series, being in black and white, adds an extra element of true horror!  Romera knows what the true meaning of horror and gore is, and it shows in his stylized artwork.

During this sequence, Dee gets hurt bad, so bad in fact that she needs to visit the hospital.  The question is, “who came to her rescue?”  During her hospital stay, readers will reminisce some flashback scenes to when Dee was inking Lucy, and her relationship with Sarah.  These moments are vital to the plot and characteristics of this series.  It opens up a wider spectrum of this story, and it adds volume to the characters.  The climactic scene at the story’s end is executed well, and the main focus given throughout the story is faith.  Do you have faith?  Did you lose faith?  Have you lost all hope?  In the end, this question may be answered, but search deep inside…how do you really feel?

[The above image was cropped due to the graphic nature of this page, and I really don’t want to spoil it for anybody.  This splash page needs to be seen and the story should be read, to truly have an idea of what’s going on in this gory scene, as I mentioned in the fourth paragraph above.]  John Ward does an amazing job with every detail written in this series.  The story is progressing well, and it’s heading in the right direction.  Juan Romera‘s artwork is bloody disgusting, gory, and creepy…and it’s phenomenal!  This series wouldn’t be the same without his vision, his style for this horror genre.  And the lettering by Eric Grissom is done nicely, the words don’t overlap with one another, which makes this issue another great read from Arbutus Comics.