Alex Cooper falls into the dream world of Comatose, a world that is part dream, part game; full of action, adventure, and blood thirsty monsters.  With the help of his friend Kevin he begins to make his escape from this world, but they soon discover that there is more to this world than meets the eye.  Follow Kevin and Alex and their adventures in Comatose.  Alex and Kevin continue their escape from the blood thirsty monsters, and find shelter in the home of a friend of Kevin’s.”

Issue 2 of “Comatose” features protagonist Kevin Nivek on the cover, holding his weapon, as blood is dripping off of it.  Judging the cover alone, readers will feel the excitement and intensity of this second installment to this series.  The story continues where Chapter 1 ended, and we see the main players, Alex Cooper and Kevin Nivek, in a rainy terrain of Level 5 of Comatose.  Kevin is looking for the door to Level 4, as they’re running away from an unexpected powerful monster, that was hunting them down in the previous issue.

Alex is still so confused, he has no idea where he’s at, and he has no idea what Kevin‘s talking about when he mentions these different Levels throughout these strange lands.  Readers will sense Alex‘s feelings once Kevin locates the door to Level 4, it’s actually quite comical, and Kevin wonders why Alex acts the way that he acts.  Once the two of them enter Level 4, Kevin has to locate that ONE safe place, where they can rest and regroup.  At this point, we are introduced to a new character, Maud, and her place is a safe haven for the time being.  This, and Kevin has to go to work, so he needs to rest in the game in order to wake up in the real world.  His last words to Alex, “…don’t wake me unless it’s an emergency,” confuses Alex, as he still has no idea what’s going on. 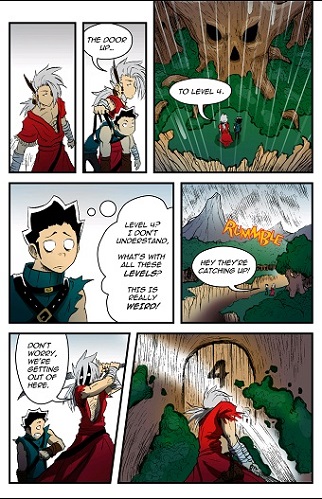 Kevin sleeps in the game world of Comatose and wakes up in the real world, and the real life Kevin has to get ready for work…even though he’s running late.  Meanwhile, within the game of Comatose, Alex wonders about Maud‘s appearances, as she looks similar to Final Fantasy IX character, Vivi Ornitier.  Maud wakes up and asks Alex if he can help her with some gardening.  What else is there to do, Alex has nothing better to do than help her out.  The scene shifts over to the real world and we see Kevin at his job, but how will things go since he showed up late?

What lurks by the mountains, overlooking Maud‘s house?  And will Alex take Kevin‘s last words seriously (…don’t wake me unless it’s an emergency)?  Who is this “Dave” guy that appears out of nowhere toward the end of the story?   Most importantly, what is the “kick out effect” that occurs inside Comatose?  So much goes on in this second installment of “Comatose,” and these questions will be answered by reading this story. 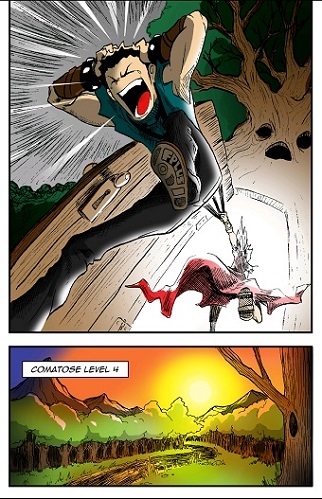 “Comatose7 #2: Chapter 2: Kevin,” progresses nicely, there’s enough action, adventure, comedy, and character development in this issue.  Creator/writer/artist Ryan Alan Collinson does an amazing job with the artwork, story, and setting of both worlds – the real world and the gaming world of Comatose.  One moment readers will feel powerful and fear inside the gaming world, and then in the real world the atmosphere is stressful and somewhat boring, especially seeing the moods at Kevin‘s work place.  The colors set the times of day/night and weather perfectly, they make the panels pop extremely well.

As I stated in my review for issue ONE, “I highly recommend this issue for fans of MMORPG’s, independent comic books, and something original.”  I rate “Comatose7 #2” 4.7 Geek-Heads out of 5, this series is coming along very well, and I’m eager to review the third issue (and the rest of this series)!  “Comatose7 #2” has 27 pages, has a rating of 12+, and was originally released digitally on October 28, 2015.  “Comatose7” can be read on Tapas by clicking HERE.  The digital version is available on comiXology for $0.99 by clicking HERE.

© 2018 Shroud Media | Different is the New Normal, All Rights Reserved.