The plot synopsis for “High School Romance is simple, and it goes like this:

“Max is now dating the most popular girl at school. OMG WHAT!?” 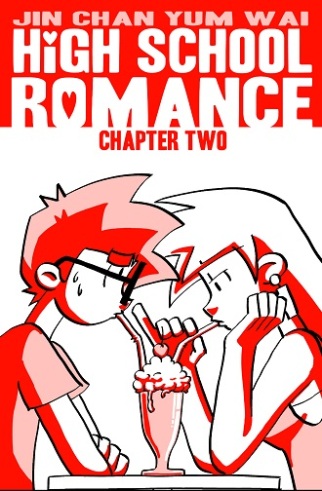 Looking at the cover for “High School Romance #2,” readers will see the two main characters, Max Middles and Candy Sweet, sharing a milkshake with a cherry on top.  Max is sweating due to nerves and Candy looks annoyed, so this answers the question from the previous issue, “…and by the end of chapter one, they’ll find out Candy’s response…” to Max’s request for a date.  Candy declared Max as her boyfriend in front of Elliot (the captain of the football team) and the students in that hallway, but what will happen now?  This second chapter picks up where issue one ended, and due to the red tones throughout this book, I like to call this second chapter the “red issue.” 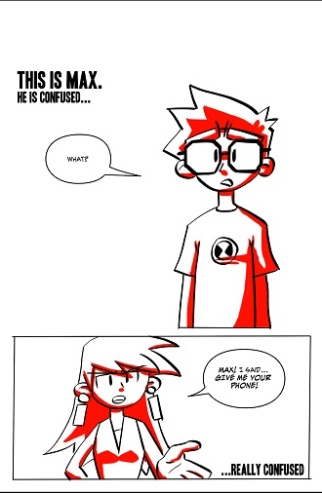 Being the least popular kid in school, Max is confused by Candy’s confession.  It’s not like this happens everyday within the halls of any high school, the popular girls generally date the popular boys.  And the unpopular kids, they’re not as fortunate as Max is here, but you can’t count them out either.  Change can happen anywhere at any given time.  So now that the students and Elliot have Candy’s attention, she asks Max for his cell phone, but he has no idea why she wants it.  Candy then takes a cute selfie and adds her phone number to Max’s phone, in case he ever wants to talk to her.  Max asks Candy if they can hold hands because they’re “officially” dating, she refuses…BUT, she asks Max if he can walk her home, so he agrees with a smile on his face. 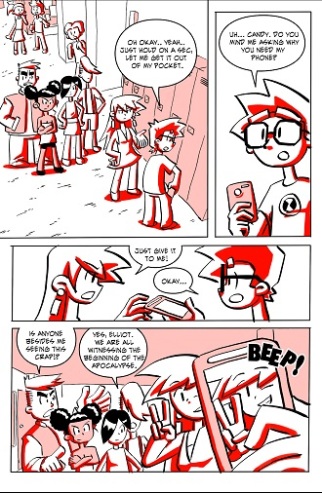 Max and Candy’s walk home is an interesting experience, and as the readers see the two walking, the story is being narrated by a phone conversation between Max and his best friend, Spenders.  Spenders wants to know the details about Max and Candy’s walk home, but Max has nothing to tell, no words were spoken.  Even though Candy told the school that Max is her boyfriend, it doesn’t make Max feel confident in himself, he’s still nervous about the girl of his dreams FINALLY becoming his girl in real life!  Once Max and Spenders get off the phone, Max’s parents knock on his bedroom door, and as typical parents act when their son has a new girlfriend, they embarrass him.  Max wants to know how his parents found out about the events that went on at school that day, and they tell Max that Spenders called them.  This makes Max wonder…why does Spenders have his parent’s phone numbers, because that’s just weird!  This scene ends with Candy looking at her phone, ready to call Max, but the question is, will she call him or click on “cancel?” 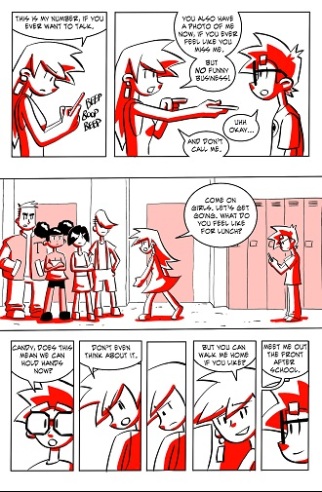 The next day Max and Spenders arrive at school, only to realize so many changes that happened overnight.  Is this a new chapter in the lives of Max and Spenders, or is this just a temporary situation?  How will Elliot deal with Max and Candy dating, since he thinks he’s the only person who’s good enough to be Candy’s boyfriend.  After all, he IS the captain of the football team, so he has reign over the entire school.  And how will Candy’s two best friends, Princess and Jewell, deal with this situation, especially since they don’t want to “smell like nerd?”

The conclusion showcases how things are meant to be run at a high school, that awkward events like this will shift the balance of how things were meant to be; corruption, essentially.  This makes one wonder how much truth there is to this statement.  It’ll be interesting to see where this story goes from here.  After reading this second installment, the story is progressing well, and the characters are becoming more defined.  This isn’t a story of the unpopular boy wanting to date the popular girl, Max got the girl, and now readers will have to keep reading to see what happens next. 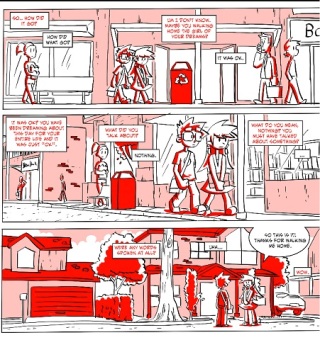 The “red issue” is another great book by writer/artist Jin Chan Yum Wai.  It’s a different take on a composition that has been told before, but not quite like this.  Two chapters in, and the characters are becoming relatable, likeable, rude, annoying, and sincere.  Remember, this IS high school after all!  My rating for this issue is 4.6 Geek-Heads out of 5, this is a fun and exciting series so far, I’m looking forward to seeing what happens in the following chapters (currently at issue six).  You can read “High School Romance #2” for free on Tapas HERE, on the official website HERE, or for a measly $0.99 on ComiXology HERE.  I highly recommend this series to all comic book fans out there, especially for fans of high school dramas.