“Takeo Gouda is a giant guy with a giant heart. Too bad the girls don’t want him! (They always go for his good-looking best friend, Makoto Sunakawa.) Used to being on the sidelines, Takeo simply stands tall and accepts his fate. But one day when he saves a girl named Rinko Yamato from a harasser on the train, his (love!) life suddenly takes an incredible turn! Takeo can hardly believe it when he crosses paths with Yamato again, and he finds himself falling in love with her… But with handsome Sunakawa around, does Takeo even stand a chance?”

俺物語!! (Ore Monogatari!!), or “My Love Story!!” is a Japanese romantic comedy manga series written by Kazune Kawahara and illustrated by Aruko.  The series ran from October 2011 – July 13, 2016, in 13 volumes.  The anime adaptation by Madhouse Studio began airing on April 8, 2015 – September 23, 2015, for a total of 24 episodes.  This review focuses more with the anime, as I haven’t read the manga yet, but this series is too good for words, and every episode deserves a review of its own.  Perhaps that’s something to look forward to once I have the chance to sit down and read the manga.

The series begins with the story of a kind-hearted, husky, red ogre who lives in the mountains, and all he wants is to be friends with the humans.  Two small children play with a ball, the ball travels ahead of the children, and stops in front of the red ogre’s feet.  As the red ogre kindly hands the children their ball, the children run away in fear, and never go back up the mountain.  The red ogre’s friend, the blue ogre, sees that red’s sad and upset about this, so he plans to cause havoc in the village.  This way, the red ogre can defeat the blue ogre, and the humans can see that the red ogre isn’t as bad as he looks.  This will change people’s ideology of the ogre’s appearances, that you shouldn’t judge someone  by their looks, but rather by what’s inside, someone’s personality. 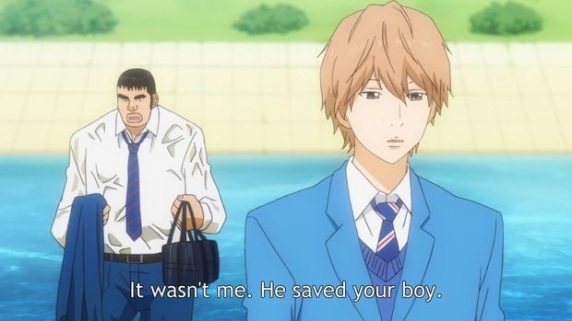 Given the moral to that story, we are introduced to the main characters of My Love Story!!  Takeo Gōda is the male lead of this series, and as the title of this series states, this is the unique story of his love life.  Which, at the introduction of the series, is not applicable.  Being a third-year Junior High student (later in the series, a first-year in high school), he’s abnormally large in size, as he’s very tall and muscular.  The thing is, the guys admire him due to his athleticism, but the girls are frightened by him, often comparing him to a bear or a gorilla (Takeo’s even seen as King Kong in the opening credits).  Takeo’s childhood friend, Makoto Sunakawa, is the polar opposite.  He’s a good-looking guy who’s always drawn the girls’ attention.  But he’s rejected every single one of them, mainly because Takeo’s had feelings for most of them, and as a true friend, Sunakawa (Suna), doesn’t want to hurt his best friend’s feelings.  Suna’s more reserved than Takeo, barely smiles, and receives all the credit when Takeo does something helpful in the neighborhood.  Like the tale of the red and blue ogres, appearances make all the difference.

Within minutes of the first episode, the main plot of the series unfolds, as Takeo saves a girl, Rinko Yamato, from a molester on the train. Immediately, Takeo develops feelings for the girl, but per usual, Takeo thinks she likes Suna.  And why not?  Suna’s always been the one girls fall in love with, not him.  With low self-esteem, why would this cute girl fall in love with someone like Takeo?  Being the great friend that he is, Takeo takes it upon himself to hook-up Yamato with Suna.  Suna’s happiness will make Takeo happy, and that’s all that matters to him.  Seeing this in the first episode, people will see the kindness Takeo has, and everyone can benefit from having a friend like him.  You’ll want him to get the girl, and not his good-looking friend. 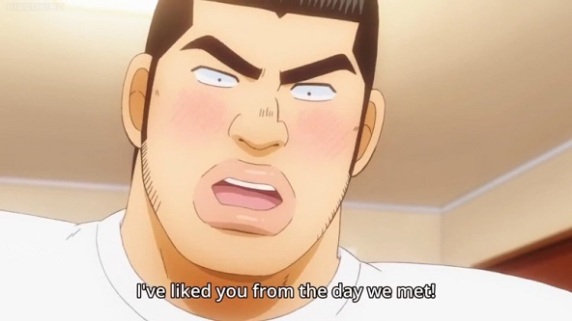 The episodes that follow reveal the big secret…Yamato likes Takeo.  REALLY likes him.  This is revealed by the middle of episode three, when they both say to each other, “I’ve liked you from the day we met.”  Having this revelation early on in the series may give the impression that the plot of this story is going to decline from here on out, considering there’s twenty-four episodes in the series.  Not by any means.  This series gets better and better as the story progresses, especially since there’s a height difference with Takeo and Yamato, causing people to judge them on their relationship.  Guys can’t understand how a guy like Takeo has a girlfriend like Yamato, and the girls think that Yamato can find someone better suited for her, not Takeo. 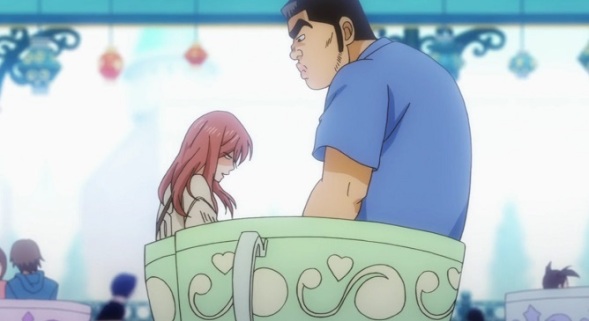 The purpose of this story isn’t “Will the guy with low-self esteem get the girl?  Will his handsome best friend date the girl he has a crush on?”  It’s different, it’s a story of this “odd” couple getting together, and how they deal with people’s reactions to them dating, and how they slowly develop deep feelings for each other.  Small, everyday things, like holding hands in public, going on amusement park rides together…and the unforgettable moment…their first kiss.  That’s what separates this anime from other romance titles, the spoiler isn’t whether they’ll start dating, it’s how their relationship will develop as the months pass by. 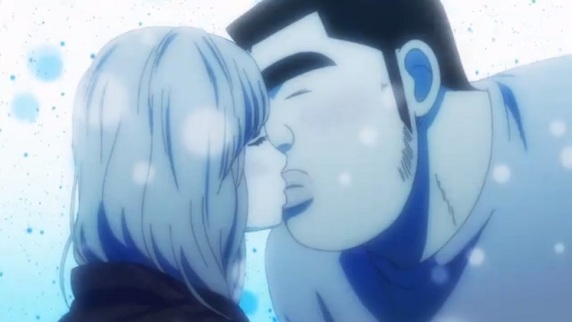 And their first kiss…it’s so moving, one will feel emotional during this scene.  Watching Takeo and Yamato’s relationship is deep, moving, and it only escalates by the series’ end.  This is a series I would highly recommend for people who are into romance stories, because from beginning to end, this series is just too immense to pass up.  Rating this series as a whole, I’d give it 5 out of 5 Geek-Heads, a true gem, it’s definitely a series that shouldn’t be passed up.  This series will make people laugh, cry, and make them realize that love is blind, appearances aren’t important when falling in love.  It’s what’s inside that counts…the heart.